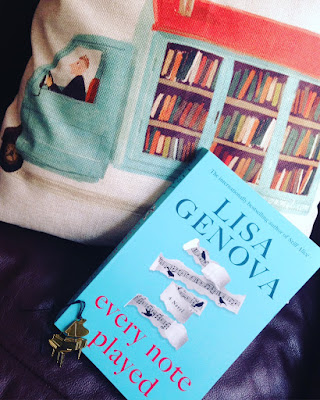 I have been a big fan of Lisa Genova's work for quite a few years. I have read all of her novels, and I love her style of writing.
For those unaware, Lisa is a neuroscientist as well as an author, and her books centre around characters with neurological disorders. (She wrote the best-selling novel, Still Alice, amongst others.)
Now, just a heads up before I share my review: this book is very sad. So incredibly sad.
But - it is beautiful and definitely a story you will remember long after you've turned the last page.
I was touched by it deeply, and would highly recommend it.
It is one of my favourites of 2018.

The story begins with Richard Evans, a world-renowned concert pianist who has been diagnosed with ALS (Amyotrophic Lateral Sclerosis) in recent months, and has lost the use of his right arm entirely.
Karina is a Polish immigrant and was once married to Richard. Together, they have one adult daughter, Grace. Like Richard, Karina is a talented pianist, but she gave up her career to support his, and to raise Grace.
The two separated after Richard was unfaithful on numerous occasions, and their relationship has been strained ever since.
Karina is now a piano teacher, too afraid to return to the journey she began as a young woman, holding herself back, and living with regret.
As the story unravels, Richard's condition goes from bad to worse, and as he begins to lose the use of his muscles and voice, he realises that he is unable to manage on his own.
Richard moves in with Karina, and although she is reluctant at first to help, she soon becomes a great support to him.
We are taken on an emotional rollercoaster as the pair try to reconcile their past before time runs out.

One of my favourite characters in Every Note Played is Richard's carer, Bill. His personality is as bright and colourful as a firework, and he treats Richard with dignity and humanity as his health deteriorates. He brings so much to the story; his tenderness and compassion bought me to tears more than once.
Lisa has again described the medical facts in great detail without it being disproportionate to the overall story line, and I learnt a lot about what a person with ALS would go through.
I read Every Note Played within a few days, and even after I finished it, I kept thinking of the book. The characters became real to me, and I felt sad to part with them. As I mentioned, it is a story that will stay with you.
After reading Every Note Played, I made a donation to MND Australia as I felt compelled to help in some small way, knowing that there are people living with conditions just like Richard.

I highly recommend it to others; whilst it isn't an easy read given the subject, it is quite simply a beautiful novel that I won't forget in a hurry.

Thank you to Simon & Schuster and Beauty & Lace Book Club for the opportunity to read Every Note Played. You can see my original review on Beauty & Lace here
Posted by In The Good Books Blog at May 09, 2018