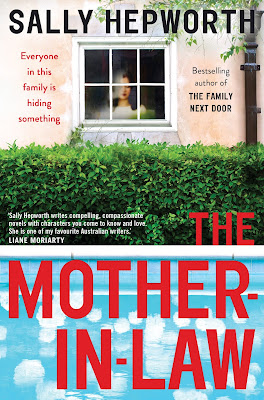 The Mother-In-Law is due for release on the 29th January, and I was fortunate enough to be given a copy to read and review prior to its release date.
And I am so excited to announce that I will be giving away TWO copies of The Mother-In-Law to two lucky followers!
If you haven't heard of Sally Hepworth, I urge you to check out her work, particularly if you enjoy novels about family, women's health, and relationships.

I have just finished reading The Mother-In-Law, and I personally think that it is Sally's best novel so far!
I read it within a few days, and I loved it. I simply had to know how it ended (I was secretly chuffed when the kids decided they wanted to hang out at home the other day instead of going out as we'd planned, as it meant I could finish my book!)

The story centres around the two main female characters - Lucy, and her mother-in-law Diana.
Lucy is married to Ollie, and together, they have three young children.
Diana is a social justice advocate, and has been married to her husband Tom for over 30 years.
Along with her son Ollie, she has a daughter Nettie, who is married to Patrick.

The story is told in two alternating timelines; the present day, and the past.
As it unfolds, the reader discovers that right from their first encounter, Lucy is desperate to make a good impression, however, it isn't long before she realises that Diana isn't the most welcoming person.

Skip to ten years down the track, and Diana has been found dead in her luxurious home, with a suicide note close by.
However, the autopsy reveals that there is evidence of suffocation and her death is treated as a potential homicide.
Someone wanted Diana dead, but who?

I love how the story is told from two points of view, that of Lucy and that of Diana. It shows that there are always two sides to every story, and also that being judgemental is of no benefit to anyone. It also depicts how a situation can be interpreted completely differently by two separate people.
Sally has done a brilliant job with this book. The characters all have their secrets, and the mystery surrounding them makes for a real page-turner.
It is difficult to say more about it without spoiling it for others,  but I can't fault this book, and would gladly recommend it.
As mentioned earlier in the post, I have two copies of The Mother-In-Law to give away.

TO WIN: simply comment below (or on the Facebook/Instagram competition post), and tell me who would you trust in your family with a secret, and why?

1. This giveaway is open to residents of Australia only.
2. Giveaway closes on 8th February 2019. Winner/s will be contacted via email within 24 hours. Failure to receive a response from the winner/s will mean the prize is forfeited and a new winner/s  will be chosen.
3. Prizes will be sent direct from the publisher.
4. The prizes are not redeemable for cash.
5. In  The Good Books blog will not be responsible for items that go missing through Australia Post postal services.
6. This promotion is not associated or endorsed by Facebook or Instagram.
7. Those who 'unlike' or 'unfollow' after the giveaway ends will be disqualified from entering future giveaways
Posted by In The Good Books Blog at January 26, 2019 1 comment: Links to this post

The Barefoot Investor For Families by Scott Pape 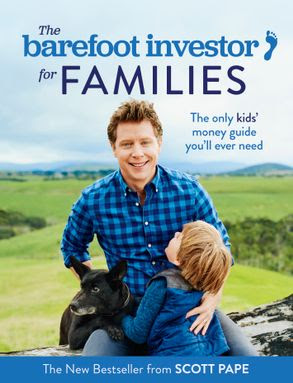 I was recently reading a Facebook post by a woman in a forum who wanted advice on how to teach her kids about finance, and a lot of the comments she received made reference to The Barefoot Investor For Families book.
As a mum of three, I was interested in the advice offered, and jotted down the title before contacting the lovely people at Harper Collins Australia to discuss my interest in the book.
I was fortunate to receive a copy, and began reading it shortly after.
Having not read Scott's first book, The Barefoot Investor, I wasn't quite sure what to expect, but I did know that I would gain some valuable information about teaching my children about money.
And I have to say that I have learnt so much from Scott's guide, and I can't recommend this book highly enough.
Basically, Scott sets out 10 money milestones that children need to achieve before leaving home as adults.
Obviously, every family is different and what works for your family may not work for your sister's, or neighbour's, etc.
But the tips are invaluable and I feel a lot more prepared after reading it.
Some of the topics that Scott covers include teaching your children how to cook from scratch, selling some of their things that are no longer being used, or that they may have grown out of, saving money on bills, and the dangers and risks involved with owning a credit card.
He also explains how the Barefoot Money Meals work (this was one of my favourite parts of the book!)
If you are unsure about the topic of pocket money, Scott has a brilliant strategy.
In a nutshell, you give your kid/s three jars (for storing their pocket money in), and three jobs (they get to choose the jobs, within reason). The money is paid every week on the same day, and divvied up. Best of all, it takes just 3 minutes every week.
I have implemented this in our home in the last few weeks, and I am pretty happy with how it has all turned out so far. I look forward to using more of Scott's tips in our home as my children grow (including his tips on getting a first job).


The book is available now at all good bookstores, and has an RRP of $29.99
For further information on The Barefoot Investor For Families you can head here


Posted by In The Good Books Blog at January 23, 2019 No comments: Links to this post