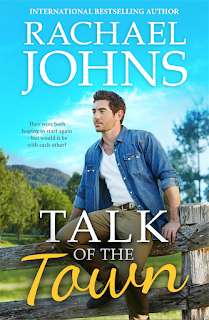 I have read a few of Rachael's novels in the past, including The Art Of Keeping Secrets (you can read my review for that here) and I really enjoy her work.
Talk Of The Town is no exception. I read it recently, and here's what I thought of it..

Megan McCormick has recently made the move from Melbourne to a deserted country town called Rose Hill in WA, in an attempt to leave her regrettable past behind her.
She has changed her name to Megan McDonald, and is determined to keep to herself. Her days are spent crocheting and baking in her home that was once the town's general store.
One day, she answers a knock at the door and is greeted by Lawson Cooper-Jones, and his adorable 8 year-old son, Ned. Lawson is a dairy farmer at his property in a nearby town, and is stranded due to a flat tyre.
Although Megan is hesitant to divulge any information about her past, she surprisingly finds herself chatting easily to Lawson, and both he and Ned form an instant liking to Meg.
By the time the tyre is changed, they realise that they have made a friend in each other, even though Meg is so reluctant to open up to anyone. Lawson has his own concerns too, as he hasn't had a relationship since the passing of his wife, Leah, although the townsfolk have tried to set him up in the past without success.
Local woman, Adeline Walsh, has her sights set on him, and is determined to make Lawson hers, but he isn't romantically interested in Adeline.

Meg introduces herself to the only other person living in Rose Hill,  a man who is known locally as Crazy Archie. He is welcoming and friendly towards Meg. This interaction makes her realise that she misses being around people. She craves the company of others, but is still worried about revealing too much of the person she once was.
Meg also discovers that her home holds a haunting mystery, and she sets about uncovering its hidden secrets.
Lawson offers to help her investigate the building's history, which sees them spending more time together.
In time, their relationship blossoms from friendship to love.

However, when Adeline finally uncovers the truth about Meg's past and confronts Lawson with the information, he is shocked with the revelation, and their relationship is thrown into turmoil.
Will Lawson and Meg be able to forgive each other and enjoy the future that they both deserve?

The Talk Of The Town is a moving novel with some brilliant characters. Ned is such a clever and cool young lad; Lawson's sister Tabitha is a woman with a big heart, and Archie is everything you could ask for in a neighbour.
I also enjoyed reading about what is involved in dairy farming, as it is a topic that I knew little about.
The element of mystery surrounding Meg's home added an extra layer of intrigue to the story.
Rachael has managed to create another highly entertaining read with her tenth full-length novel, The Talk Of The Town.

And you can win your very own copy of Talk Of The Town, but be quick as entries close tomorrow! Head here to enter!

Disclaimer: I was given a copy of Talk Of The Town thanks to Harlequin Mira and Beauty & Lace. To read the original review on the Beauty & Lace website, head here
All opinions are my own and are not influenced in any way. I was not paid for this review.
Posted by In The Good Books Blog at June 02, 2017