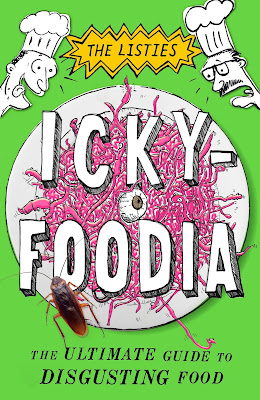 Children's comedians, The Listies, (Richard Higgins and Matt Kelly) have already released Ickypedia (a dictionary of disgusting new words), and now they are back with Icky-Foodia, which is an alphabetical guide to disgusting foods!
What can I say except that this is one hilarious book that both children and adults will enjoy!
There are a LOT of puns and jokes thrown in as The Listies define foods, meals and recipes, which will have you laughing out loud!
From Devonshire Wee to Feeta Cheese to Enchihuahua's, The Listies have certainly thought up some really disgusting foods that will whet your appetite (or not!) :)
What I like about this book is that it doesn't need to necessarily be read in order from first page to last. My 10 year-old daughter likes to flip through the book and read out sections which have us both in giggles.

Icky-Foodia was released in October through Penguin Random House Australia, and has an RRP of $14.99
For further information on this title, head here
Posted by In The Good Books Blog at November 13, 2017