Book Review: The May Beetles - My First Twenty Years by Baba Schwarz 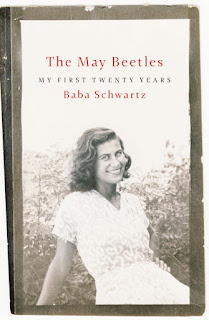 Last year I watched a program on the ABC about a woman named Baba Schwartz, who is a survivor of the Holocaust. This dear elderly lady had me captivated as she was being interviewed, and when I heard that she was releasing a biography titled The May Beetles, I knew I had to read it.
I have recently finished it, and thought it was a gripping read.

The book is based on the first twenty years of Baba's life. We learn about her innocent childhood - the school she attended, the games she liked to play, as well as the friends she had.
A safe and happy time for her in a small Hungarian town, growing up in a loving Jewish family.
But in 1944, Baba's world was turned upside down when the Germans transported 3000 Jews from their town of Nyirbator to Auschwitz, including Baba and her family - her mother Boeske, father Gyula, and her two sisters, Marta and Erna.
The way in which Baba describes her ordeal is told with such heart and sincerity.
Being almost starved to death and stripped of all dignity in several concentration camps alongside her mother and sisters, I simply couldn't believe how she fought on in the direst of circumstances.
The things that she had to witness and undertake were mortifying.
But Baba is a woman of hope and courage, and her positivity leaps at you from the pages.
The book also includes photos of Baba, her family, and her friends, as well as archived Nazi documents.
I would highly recommend that you read this emotion-filled story about this truly inspirational woman.
For further info: https://www.blackincbooks.com.au/books/may-beetles
Posted by In The Good Books Blog at February 06, 2017