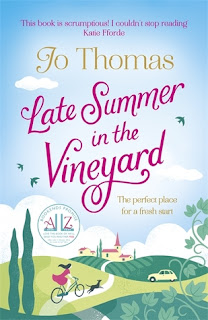 It's been a while since I've read a romantic-comedy-type book, and this one really fit the bill.
The main character is Emmy Bridges, a woman in her mid-thirties, who lives with her elderly father, and is struggling to keep the roof of their family home over their heads.
After her mother's tragic passing years ago, Emmy's father grew depressed and somewhat of a recluse. With only Emmy's wage as a telemarketer to support them, she takes a leap of faith when a work opportunity to spend 12 weeks in France learning about wines comes to fruition. She is determined to gain the knowledge that she needs, and  has high hopes to secure a promotion.

As Emmy's journey begins in France, I was immediately captivated by the author's descriptions of the sights and settings. In the author's notes, Jo Thomas mentions that she often holidayed in France as a child, worked there in her teens, and continues to holiday there to this day. This passion  and knowledge of the area really shines through in her writing. Her depictions of the food and wine that the region is known for left me longing for a taste on more than one occasion!

Emmy meets Madame Beaumont, who owns a vineyard, and the two form a firm bond. Madame Beaumont is a feisty, determined old woman set in her ways, and she was one of my favourite characters.
Emmy is faced with many situations that seem impossible to overcome, but with Madame Beaumont's guidance, she learns to trust her instincts.

Nick, Gloria, and Candy are the team of co-workers that make the journey to France with Emmy. The team stay at Featherstones Wines during their stay.
Charlie Featherstone is a client of Emmy's boss who is taking over his father's company, Featherstones Wines. He hires Isaac Allen, a wine maker, to help him.
These two men really add a lot to the story! I won't give too much away, but it was really interesting to read about the chemistry that Emmy develops with each of the men.

This is a nice book,  a bit predictable in parts, but the really summery, relaxed feel, combined with the fantastic descriptions and characters, makes it a perfect holiday/weekend read.